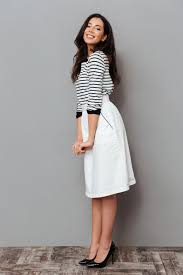 How Your Outfit Choice can Leave an Impression

We are all guilty of making a judgment based off a first impression. While some of these factors include the way someone speaks, their body language, facial expressions, what you wear can say just as much as anything else you do. Yet, we can’t help but question, why does an outfit hold so much power?

We’ve all heard the saying “dress to impress”. What about “dress to impress, not to overwhelm?” Depending on the job you applied for, you’ve probably done a mirror double-take about if you made the  best outfit choice. I have a friend, Carly, that comes from a very well off family and is fortunate to have very very nice designer clothes. Not going to lie, but when you look at her,  you don't think computer science major, you think future Beverly Hills Housewife in training. Whereas often the idea of fashion at a small tech startup looks a little like a t-shirt, cargo shorts and  a good old socks and sandal look. As most friends do before an interview, we decided to do a mock interview with her outfit on and everything. However, as she was talking I couldn't help but be distracted by what she was wearing. I found my mind wandering to things like “I wonder how much money she spent on that” which then led to “I wonder how much her dad makes”; and that's when I realized that she could not wear this outfit.  After she had changed I realized that I was able to focus more on what she was saying rather than what she was wearing. Many people can agree that a 30-minute job interview is hardly enough time to showcase the type of person you are. This only goes to show the importance of a first impression. While Carly’s intention was to portray herself as a confident successful businesswoman, someone else could have easily portrayed her as a  materialistic privileged girl from Beverly Hills. While that may be the wrong interpretation, it is in fact still the first impression.

The most important thing clothes can do for a person is to make them feel confident. A top is just a piece of cloth used to cover your undergarments if you don’t feel good in it. But that top can serve so much more to you when you feel confident in it. When trying to decide what to wear for a specific occasion, some people tend to consider “dressing the part” as an essential factor in their decision making. But not always. For example, a few years back I had a wedding that I was going to attend in August. I knew that there would be a lot of people there that I hadn’t seen in ages.  When looking for a dress for this wedding I felt like it was important to find a dress that really showed my success since graduating and working at E! News.  With little time to make a decision, I was able to find the most beautiful chic and trendy $300 dress from Nordstrom. Only issue was the dress was just a little too small (and when I say a little, I mean I 100 percent needed to go a size up). Even Though I was fully aware that I would not be able to breathe, I decided to wear the dress just so I could show how cool and on-trend my life in LA is. However, the only thing I was able to show those girls was how insecure I felt in that dress. The entire night I was so concerned how my love handles looked, or if my stomach was bulging out from my  Spanx. Confidence is everything, and just because you may think you have found the right outfit to portray a first impression, the impression is only useful if it is not forced.

It’s safe to say that what you decide to put on does make an impact on someone’s impression of you. It’s the reason why we change our clothes ten times before a date, the reason why we call not one but three different friends to get their way too harsh of an opinion. While what you wear can make a positive impression on someone, it is just as important to get that same positive response for yourself.